Today’s guest blogger is Logan of the Practically Culture podcast. If you are interested in hearing more from Logan, he can be found podcasting, videocasting, and tweeting.

I have a secret theory that Mad Men is best read as a treatise on women struggling to establish personal identities other than the ones society wants for them. Sure, there’s the stuff about Don and his own secret identity and ongoing fall the opening credit sequence reminds us of every week and all that. But as the seasons have progressed, the most consistently compelling stories of self-invention have been those of the show’s women.

Mad Men of course depicts plenty of women from the secretary pool working their butts off to achieve more for themselves. Peggy’s journey from secretary to copywriter to good copywriter to copy chief is perhaps the most obvious. Joan’s transition from office manager and sometime secretary to partner is perhaps the most costly. Both women basically invent their new jobs and new selves. But don’t forget about Megan’s path from secretary to partner’s wife to copywriter to actress. She’s obviously not a trailblazer in becoming professional actor, but she’s certainly worked hard to make the most of the opportunities she’s been given.

In that tradition, the recent episode, “The Better Half,” brilliantly revealed the latest phase of a transformation that is probably the show’s least threatening to any sort of glass ceiling, yet might be simultaneously the most impressive reinvention of all: Betty’s.

Betty has never been a secretary. Society gave her the different, though at least as objectifying, roles of model and suburban housewife to play. And she did play them, more or less. But Betty never thrived in that kind of suburban wife and mother role. (Not many women did—the early seasons of Mad Men expertly, if depressingly, explored the malaise of all the bored housewives in Betty’s circle.)

At first we sympathized with Betty and her circumstances. But soon we came to see other aspects of Betty—ugly aspects, like selfishness, childishness, and a coldness towards her children that seemed to go deeper than just being a product of her time—and we became less forgiving of Betty’s acting out.

Ultimately, many viewers tired of seeing Betty, or even started to actively dislike her: grow up already, woman! In recent years I, for one, had started gritting my teeth while Betty ran to the arms of another man to save her from the last one, endlessly and tiredly raged at Don, and consistently showed a complete lack of interest in being a warm mother. Somehow this character played by the gorgeous January Jones was about the least attractive woman in the whole show, even before we had to sit through her weight gain and halfhearted attempts to slim down again. And though Mad Men is my favorite TV show right now, I was tempted to fast forward through every Betty scene. She seemed like the one woman even the show’s writers had lost sympathy for.

Everything changed with this episode. It all clicked and we finally saw what Mad Men had been up to with Betty. Our first clue that Betty had regained full use of her feminine powers was when a man at an evening event started hitting on her, much as Henry first did at Roger’s wedding. Henry, we learned, got off on the attention Betty received from another man. (Was this was a one-time thing or a kinky role play they regularly engaged in? Either way,) Betty had come leaps and bounds in a few short episodes, and the show rewarded us for enduring her meandering by introducing us to the new and improved Betty.

As excited as we are to see Betty making the tongues of ordinary men wag, the old Betty could do that. Betty 2.0’s real test—her real conquest—would be Don. The man who, we know, marries women he can show off to display his own status, trophy wives. But the women who get his full gaze, the ones that really get his juices flowing, are stronger, more confident, and less confined to traditional women’s roles.

And conquer Don she does. When they connect, Betty 2.0 is the one who knows what she wants, maintains her emotional distance, and comes to and leaves the encounter on her own terms. Don ends the episode sitting by himself, with Betty happily enjoying breakfast with her husband as though nothing had happened the night before.

Betty doesn’t reinvent herself in as conventionally feminist a way as the office ladies have, but she, maybe more than any of them, has found a way to master her circumstances and exercise agency over the men around her.

Betty’s recent story lines have focused on her becoming less physically attractive by gaining weight and struggling to lose it. Of course, she was always rather cold and unattractive on the inside. In this episode, she has finally lost her excess weight and corrected course from her brief dark-haired detour, regaining her conventional beauty. And let’s be honest, she’s blessed with plenty of the outward beauty so valued both in her time and in ours. But she’s had that for most of the series, and yet she has so often been profoundly unattractive as a character.

What makes her truly attractive to Don, and to us as viewers, is her confidence, her new found maturity in making her own choices and accepting the consequences, and her expertise in wielding her sexuality as she cares to. 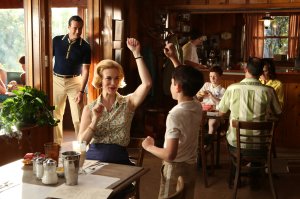 In doing so, Betty breaks free in a certain sense from some of the significant constraints of her time and place. Betty has gone from being a typical damsel in distress, needing rescuing from man after man, to now being an agent in her own right, taking charge of her experiences whether or not society or the men in her life approve. Betty can engage Don as an equal. (And I suppose, while we’re being honest, we should acknowledge that her reinvention, while powerful, is on a personal scale, and not necessarily breaking new ground for women in society. But still.)

It’s clearly more than her looks that makes her so appealing in this episode. She’s beautiful on the inside now too. And Don, Henry in the car, that guy at dinner, and we at home all know it. In her own way, Betty is the most successful of any of the show’s women at her reinvention.

Many thanks to guest blogger Logan for sharing his take on Betty Francis (née Hofstadt, formerly Draper), of our beloved Mad Men, which boasts more dynamic and complex female characters than most other shows on television combined.

So, what are your thoughts on Betty’s transformation? This post got us thinking: the sexual revolution changed the lives of all women in many ways, and this cultural shift was so huge that it even managed to creep into the lives of Republican politicians’ wives, like Betty Francis. When we met Betty, she was emerging from the 1950s. In the late 1960s, she has a much less rigid role to play, and so her empowerment could be interpreted as stemming from the changing world around her. In this way, her transformation feels less personal and more universal, to us.

On a personal note, I have never once lost interest in Betty. I’ve said this before, and I will say it again now: I could watch Betty eat bugles for an hour and half be completely thrilled.

Thoughts on Betty? We’d love to read your comments. Interested in submitting a guest post to RLB? Send us your essays about women in the media to reallivingbeauty@gmail.com.

Today I put on some pants.

Writer. Geek. Girl. Not Necessarily In That Order.

Heartstrings across time and space...& stirring the quirks.

Me being Me, Unabashedly FREE.

No, YOU Go Outside.

Simplicity ...and it's natural predators in the wild.

Beauty comes in all sizes

A blog out of Bellingham, Washington

All Meat. All the Time.

Why I'm Tired of Being an (Asian) Actor
foodtuitive

Entertainment and Everyday News brought to you in a flash

Movies with a bite.